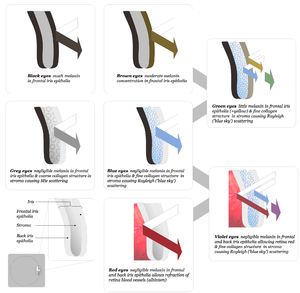 mechanism for producing some eye colors

The genetics of eye color, like hair color, are still being worked out, and it's clear that several genes can modify the eventual outcome. In a population sense, it should be noted that all populations except Caucasians basically have brown eyes, while amongst Caucasians one categorization that researchers track is blue vs non-blue.

One gene with a significant role in determining blue eye color is OCA2, a gene with variants first linked to albinism and perhaps melanoma risk.

The following OCA2 variants, all located in the first intron of the gene, have been linked to blue eye inheritance; together, they form a haplotype that occurs in 90% of individuals seen with blue or green eye color, but can also be seen in 10% of individuals with brown eye color. [PMID 17236130]

More recently, one potentially functional OCA2 SNP that is part of a 13 SNP haplotype covering 166kB located at the other side of the gene has been found in 97% of individuals with blue eye color [PMID 18172690]:

gs237 is about eye color

Other snps linked to eye color:

An investigation of not blue eyes

Eye color of someone with albinism eye picture

Read rules from top to bottom. In some cases, a rule cancels out results from rules above it.

Retrieved from "https://www.SNPedia.com/index.php?title=Eye_color&oldid=1610211"
Categories:
This page was last edited on 14 February 2019, at 15:40.
Privacy policy
About SNPedia
Disclaimers